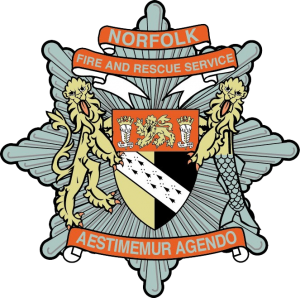 On Monday night I got my first taste of water rescue training. I also discovered that you don’t need a river to practise water rescue techniques, apparently all you need is a drill yard and some imagination! We covered some of the things I may be asked to help with including setting up the raft. I also had a go at using our throw lines. They are bags of floating rope that we throw to people in the water so that we can pull them to safety.

I soon discovered it is not as easy as it looks. We had a target to aim for and to start with I was throwing it way too high or not long enough. After a few failed attempts though I started to get the hang of it.

I was also wearing the kit that we have for water rescue our drysuits. They aren’t as comfortable as they look but I’m sure it will keep me warm. At one point I was asked to go for a swim but I didn’t have my arm bands on so I could only paddle!

Last week we did some Road Traffic Collision training and cut up a car that was on its roof. Because it’s upside down it changes how we would deal with it and the types of kit we would use. It was a really good learning session for me as this wasn’t something I had done at training school. Again I learnt a lot from the more experienced guys on the crew on dealing with it, some of the fire fighters have been in nearly 20 years so there isn’t much they haven’t seen or done. I still haven’t had to cut up a car for real yet but the training we have been doing means that I am ready if I have to.